President Valles returned to the throne at the meeting on September 3, 2014.  She seemed more at ease after a little R&R in Oregon, and moved things along swiftly.

Erin McGregor also made an appearance, mentioning that she purchased a new car that has a sticker that lets her use the HOV lane, but it still has a back up engine, as not to smite her employer…  Rumor has it that her hubby has a new plane that he could just drop her off with a little help from a parachute, but we won’t go there…

Nancy Glenfield gave a happy buck for her eye surgery that went well…  Beri Kasper also contributed to the pot.  Edi Birsan was out on a secret diplomatic mission to Rome. Better a mission than an inquisition! 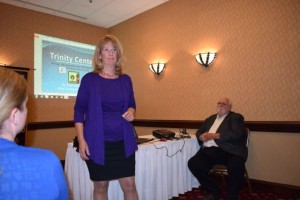 Our speakers were Rotarians Horace Crawford and Kathe Mitchell, as well as Karen Leffler from the Trinity Center in Walnut Creek.  The mission of the Trinity Center is to serve the homeless and working poor population in Central County.  They offer services such as a food pantry, clothing, washing machines and dryers, and showers.  They have recently expanded their program from two days a week to seven days a week.  Think about that – something we take for granted like a shower or clean clothes – can make such a difference in someone’s lives.  Not to mention being called by name and acknowledges as a human being.  Thankfully, few of us will know what it’s like to become invisible while in plain sight.

Kathy Lafferty held the winning ticker number, but alas, drew the 2 of Clubs… that means the pot’s now over $271!