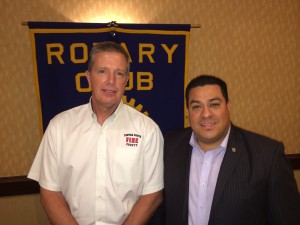 When Fire Chief Jeff Carman spoke at the meeting on June 4, 2014, he talked about his approach to serving the seven or so cities in the Contra Costa Consolidated Fire Protection District.

He also discussed the challenges to making the most out of the available budgets.  He talked about an initiate that would bring on a Physicians Assistant or Nurse Practitioner so that a person needing assistance could be treated at home or referred to a service rather than being taken to an emergency room.  He cited a program that was funded by Kaiser in another district that saved $4 million dollars a year for emergency rooms.  Another program has placed am ambulance with only EMT’s to respond to medical calls, which make up about 66% of the 911 calls they receive.

In another interesting fact, he mentioned that Station #6, in downtown Concord, is the 4th busiest fire station in the US based on the number of calls they respond to!